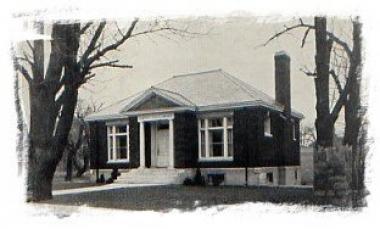 The Pascoag Public Library was the first library in the town of Burrillville. It was founded in 1871 by a group of women who called themselves the Pascoag Union Sewing Society. In 1873 they renamed themselves the Ladies Pascoag Library Association, appointed a librarian, and purchased 163 books which were housed in the librarian’s local store.

The Library moved four times between 1883 and 1899 when Samuel Mellor offered the use of a room rent free over his mill office on Sayles Avenue where it remained until 1913 when it moved to the Steere Building on Main Street. At this time charges associated with the loan of books were discontinued and the library became known as the Pascoag Free Public Library.

A bequest of $500 from Miss Rosamond A. Steere stipulated that the money be used for a free public library building within ten years. This started the building fund which grew through numerous fundraisers and donations. The present home of the Pascoag Public Library at 57 Church Street was erected in 1924. The Library is still privately owned by the Ladies Pascoag Library Association and governed by the Board of Trustees which is still composed of all women.

In April 2011, the library received grants from the Champlin Foundation and the Levy Foundation. These grants allowed for an addition that doubled the size of the library with no expense to the taxpayers in the town of Burrillville. In October 2011 the addition was dedicated to Helen Fairbrother Moroney, president of the Ladies Pascoag Library Association.

The horror author H. P. Lovecraft set part of his story "The Horror at Red Hook" (1925) in Pascoag.

Not many weeks ago, on a street corner in the village of Pascoag, Rhode Island, a tall, heavily built, and wholesome-looking pedestrian furnished much speculation by a singular lapse of behaviour...

Available at our library!